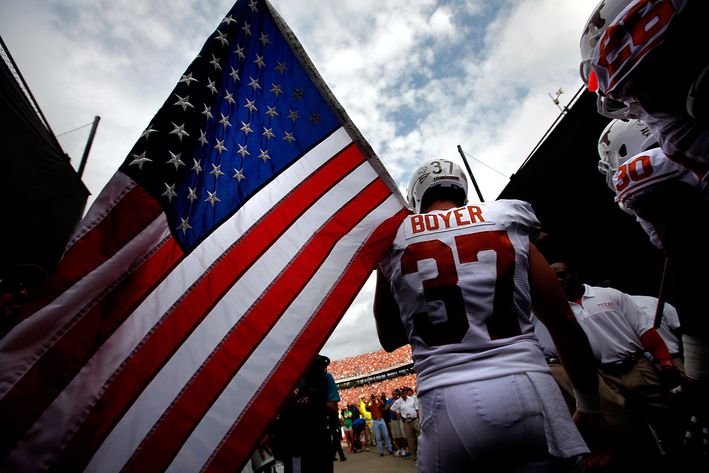 This is simply an incredible story.

A little more than two years ago, on the 11th anniversary of the 9-11 attacks,Texas Longhorns fans got to know long snapper Nate Boyer for the first time, heard his story about the influence that terrorism had on his desire to join the armed forces.

Now, with Boyer’s eligibility exhausted and the undersized former walk on in dogged pursuit of his next seemingly insurmountable task, Don Wolken of Yahoo has given Boyer’s story the rich treatment that it deserves.

From a directionless young man to an uninvited relief worker in the Sudan to a Green Beret to a walk-on role at Texas to the becoming the starting long snapper while still remaining a summer-time soldier, there are few stories more unique and more distinctly American than Boyer’s.

A lot of cliches get thrown around comparing football to war and talking about the deep bond between teammates, but what Boyer describes and embodies is true selflessness and comradery in the face of death in sharing why he went back to Afghanistan during the summer instead of staying in the States:

“I thought of it this way: If I, someone who wants to be there, doesn’t volunteer, there may be someone there who doesn’t want to be there,” Boyer said. “Maybe he’s got a wife and kids and God forbid something happens. If something would’ve happened to my body, I knew I could handle it.

“When one of your guys goes down or gets shot,” he continued, “the first thing you think of is, ‘Why did that have to happen to him, why didn’t that happen to me?’ Which is weird. The normal response is, ‘Thank God that didn’t happen to me.’

“Your whole purpose on a mission is protecting the guy next to you. It’s never about you … I [wanted] to go back and serve, to deploy. I know how good I am at my job and I know how I can relate to [the Afghans] regardless of language barriers.”

Having come so far, seen so much, and achieved the completely unexpected and seemingly impossible already, who can say with any certainty that the journey for Boyer stops short of a chance at long snapping in the NFL?

It would be an improbable ending, but nothing about Boyer’s story has ever followed a typical course.

Hook ’em, Nate, and thanks for your service to our country.